When Tenacious D presented their melodic rock anthem to the best song in the world, we all stood and watched and listened, humble in agreement. Indeed, a tribute is just that, an acknowledgement of something we revere, a testimonial of something we hold in the highest regard. Today, the U9 Green Machine played their own tribute, to the best match of the world.

Some call it the hunger or the lion’s heart; others refer to it as ‘the fire’, whatever it is, the spell was cast and it emanated from the bodies of all of the players on this mild winter morning. Helensburgh Black looked like hornets and engaged with fierce vigour; this however, was matched equally with the steely determination and predatory play of our green lanterns. This was a game of gritted teeth and intense focus.

The hornet’s nest was stirred and the whole game was an explosion of frenzied energy, so delightfully dynamic that the ball never stopped rolling. Skill, agility and a strong sense of pride led U9Green to victory with goals from Josh, Stuart and Tom, the latter scoring his first hat trick. Goals were celebrated with clenched fists and a ‘Yeah!’, hi- fives or broad grins. This match truly was a tribute to the best match of the world, though some left wondering if indeed it was the best match in the world, hmmm… Either way, throughout the match, parents subconsciously felt for their wallets as they knew they would soon be required to pay up.

Anakin and Jackson shared goal keeping duties and performed admirably under pressure. On field, both played hard and kept their positions well. Stuart foiled his adversaries and ran his guts out. Jasmine was relentless in her defence and did not give the opposition a break, and really, why should she? Mikey broke the flow of the hornets and took advantage of any loose balls that came his way- he provided the evidence for why you need to keep the ball close to your feet. Let it go that bit too far, well Mikey will tell you the rest! Josh had many fantastic touches of the ball and like a warrior, gave all that he had. Shanaye, the smiling assassin, took no prisoners and effectively diffused many of Helensburgh’s strategic plans and Tom ran hard and fearlessly forged forward at every opportunity. Jubilant roars from the crowd echoed across to the ocean and up to the tips of the escarpment.

It was such an inspiring and entertaining game. Ocean Park, notorious for its punishing wind and cruel cold conditions, offered little or no resistance to the promise of greatness that unfolded. Kudos to both teams, it was indeed a tribute to the best match in the world.

This is just a tribute!
You gotta believe it!
And I wish you were there!
Just a matter of opinion. 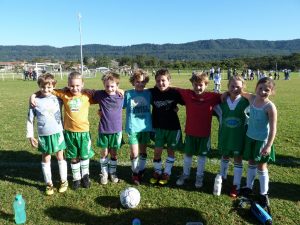