When a team works together, communicates their intentions and discovers the joy and fever of unity, the spectators are guaranteed a fantastic feast of football. This week’s game provided the sideline with many awe inspired and pride filled moments.

It was an usual match that from the outset demonstrated our teams generous nature and spirit of sportsmanship. Balgownie Pink were down in player numbers and an arrangement was hatched to allow the facilitation of a more competitive match. Ultimately, it worked against us when our generosity was exploited!!! Alas. In the big picture of things it doesn’t matter and admirably, the manager of the opposition took the time out to personally thank and praise U8Green for their sportsmanship. While we were not the victors on this occasion, this curious match provided many great opportunities for our team to explore and utilise their ever developing football skills.

All players excelled and held their positions well throughout the game and three great goals were scored; one by Anakin and two by Stuart (no doubt sparking sibling tensions on the home front!) During the game, all players honed in on their primal instincts, and recognised that by working together greater heights could be scaled, and sooner! Passes were made like a telepathic line of communication was opened between them. Not only were players looking to one another to move the ball forward but they were making themselves available for passes by moving into more advantageous positions. This was our triumph. Like a mysterious, whispering wind that passes through the bending limbs of a willow, subtly transforming the tree’s shape is forever; our team, U8Green have begun their metamorphous. Watch this space…

Match awards went to Anakin for his glorious first goal of the season and the first goal for Russell Vale in the match, and Josh for his continued hard efforts and impact in the game. 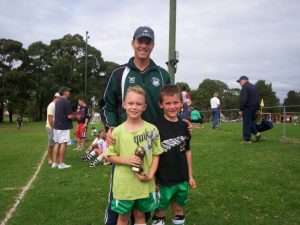