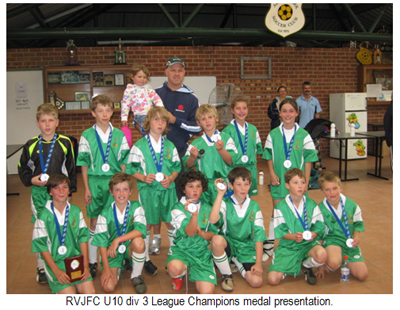 The U10s were graded into division 3, not a bad effort for a single team club. The season got off to a slow start with a draw against Bulli, but picked up a bit after that. In all we played 7 competition games, winning 5 and drawing 2. technically finishing undefeated!!! (if you leave out the floggings received as part of the grading process). This meant we were league champions and the kids received their medals and the plaque on the week the final was played.

We were pitted against Figtree in the major semi-final that finished in a 1-1 draw and went to extra time, and then to the dreaded penalty shootout. Unfortunately we missed a couple of shots and missed out on direct entry to the Grand Final. Last weekend we played against Coniston who were a pretty string outfit. We went a goal down before equalling late in the first half. The half time pep-talk did it’s trick and the kids came out firing in the second half to belt home 4 unanswered goals. A massive effort, and well deserved entry into the Grand Final.

The U11s had a similar path, finishing second on the table to Wollongong Olympic. They went down 2-0 in the major semi, but had the benefit of a second chance against Dapto. The game finished in a stalemate at full time and the same at the end of extra time. Fortunately they were able to hold on and on the 6th attempt the sides were split. Russell Vale through to the Grand final against Olympic.

If you are looking form something to do next Saturday (5th Sept) head down to Kiama for some exciting Football and support the Cobras.

Good Luck to both of these teams.

The U15s had a great season, especially considering they were promoted this year from 3rd division into 2nd division, and ended up finishing 3rd on the table. This placed them in the sudden-death Semi final against Figtree which they won. They played Albion Park in the final but went down 2-1, ending their season 1 week earlier than they would have liked.

The U14s played hard all season and missed out on the finals by a solitary point. Some of the most “gutsy” football of the year came from this side which never gave up, even on the occasions they were playing short.