The 14.1’s have had a fairly low key build up to the 2013 season. We made a decision to take on an extra player  which resulted in Brodie Foster joining the team after playing for the Wolves last year. He has fitted in well with the tam which was helped by the fact he goes to school with a lot of the boys. We welcome him to the team, and the club, and wish him all the best for the season.

We opened with a Trial against the Bally White side down at Bally. Coach Julio was happy enough with the side’s effort, despite going down by a goal.

The second trial was a casual affair against the Bulli U15.1 team, whom we played in a similar trial game last year. The boys played 3 x 20 min 3rds in a very hard fought, but fair encounter. It was good to see Bulli’s ex RVJFC players running around the Cawldron again. At the end of the game neither team was able to break down the defense of the other, the game ending in a Nil-all draw. Supercoach was happy with the Team’s performance against a bigger, stronger, team.

Thanks to James for bringing the boys down and helping with our pre-season. 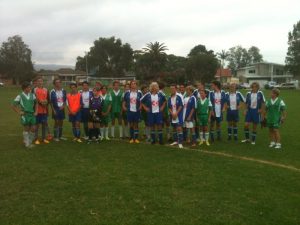