Thanks to Dean Owen for taking a video of the game and passing it on, certainly made writing up a match report much easier! 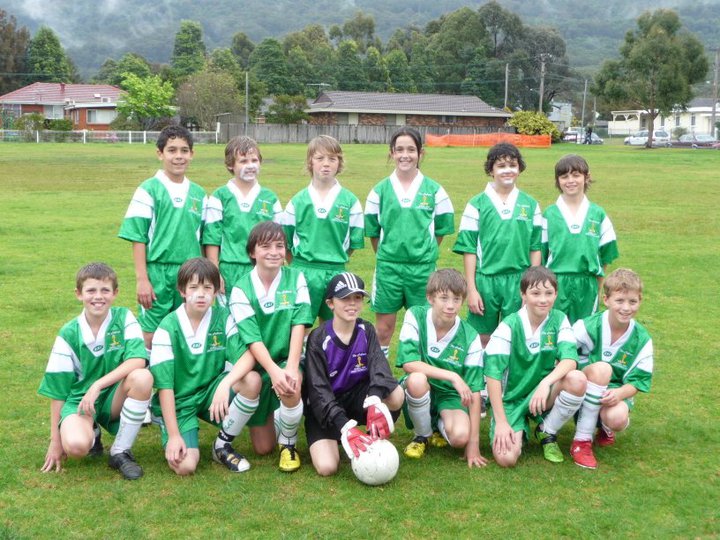 We started off the day at the Miranda’s for an early lunch of fruit, muesli bars and water. Watched the 2006 World Cup qualifying game against Uruguay in order to pump the kids up. They quickly got bored once the goals were scored and wanted to see the penalties! Just before we left for the ground we presented the kids with their named shirts which did the trick and the kids left full of excitement. 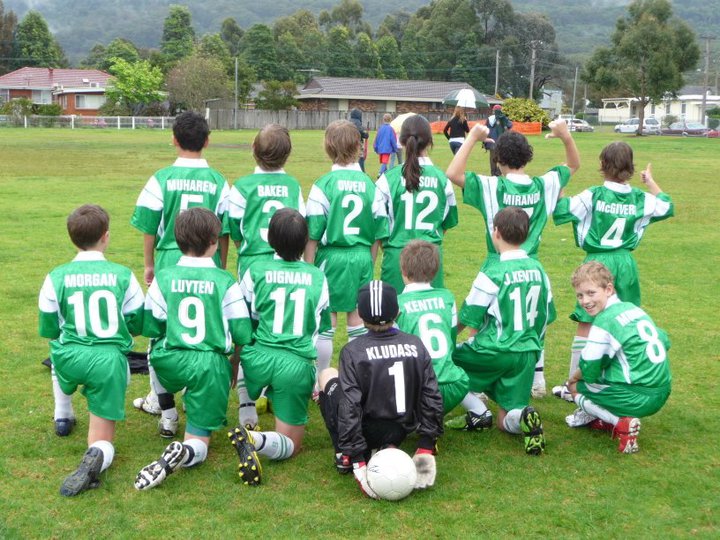 Julio ran them through their warm up while I wandered around chewing my fingernails. With a level of confidence that I couldn’t muster Julio declared 5 mins before kickoff. “They’re ready.” While the conditions were pretty terrible, wet and soft, they weren’t as bad as Sunday was going to be for the girls, but I was certainly worried that Bally might get a messy goal and we would struggle to get one in the net.

They started like a house on fire sticking to what they had been drilled in all year. Passing the ball around and keeping possession. Unfortunately they lost the ball and, as suspected Bally were on the break. Braeden, as calm as ever, came out and belted the ball over the side. Bally did attack a bit after that, and it was probably the longest that they would spend in our half the whole game. We mixed things up a bit with Sam in the midfield and Mark up front. While he was playing pretty well Sam was out of sorts worried he would get it wrong so we swapped back, but not before TK had a great corner that SamL and SamM both nearly got a piece of. Bally continued with their bash and chase game, but were always cleaned up by TK and the defensive crew.

Wilson had missed a couple of days off school with the bug that is going around and started on the bench. He came out with Jasmin after 10 mins and launched into attack, creating a good chance. Jasmin did her part in defence and was pummelled to the ground while diffusing an attacking raid. Braeden also put an end to a chance by plucking the ball out of the air with two beefy forwards steaming in on the ball, as always, calm as can be.

Matty D made a mid field break out of our box and took the ball forward to SamL who passed onto Mark, beating his defender. Mark charged toward the goal and there was nothing but daylight separating him and the goalkeeper. Mark was on his way to Grand Final Glory. The defender who was chasing Mark did what defenders do, and dragged him down from behind to deny him a scoring opportunity. The Ref did the right thing and awarded a spot penalty. TK converted from teh spot by pounding the ball into the top of the net. The goalie had no chance.

The next two highlights were attackign raids started by our Full backs. Jacob started the first one and delivered a pass to SamM who had his shot go over the crossbar. The second was started by Deano who charged up the line and crossed to find Wilson, SamLwho passed to SamM and then Ryan. You’d bet a house that on a good day Ryan would have nailed it as he normally does, but with the conditions it wasn’t to be and the shot went a touch wide. The kids were still playing great football and creating lots of chances.

Just before half time Bally made a break up the middle of the field and ThomasM made a ball and all tackle and in teh process copped a knee where it was going to hurt a lot. All part of the solid defensive unit. We went into half time 1 nil up.

We came out and played much the same. Ryan again had a great chance off a TK corner, this time using his head. Used great technique to deflect the ball, but couldn’t get enough angle on it and it went wide. Coach Julio was happy.

What could be written a hundred times was how well the midfield controlled the ball. Each time it came out from a Bally clearance it seemed like the ball would gravitate towards Reuben, he’d jump up. It would hit him on the thigh or chest, or some body part, the ball would drop perfectly to his feet and he would distribute it around him and they all played the triangles. Coach Julio was even more happy. The support that Reuben, MattyD, Mark and Wilson gave each other was almost perfect.  Playing football as it is meant to be played.

A big cross came in from Jacob who had ventured forward again. The ball hit one of the Bally players, bounced in front of Wilsom who chipped the Goalkeeper high into the net for the second, well deserved, goal. Will didn’t get to play as much as he would have liked as he wasn’t 100% but scoring in the GF certainly made up for it.

A little later after a few more attacking raids Jacob brought the ball forward, passed up the line to Ryan, who crossed into an unmarked SamL. Two touches to line it up then BAM! The ball would have made it all the way to Cawley Park if the net wasn’t in the way to stop it. He didn’t miss this opportunity, and by then it was pretty well sealed up.

Bally had their shot on goal go wide, and SamM had a final shot just before the whistle went. Coach Julio was still happy, and Coach Garry very, very, relieved.

While the kids up front may get the glory, and the kids in the middle get a lot of the ball, our strength over the year has been how few goals were scored against us.  This was shown again in the Grand Final. TK, ThomasM, and Jas in the middle looking after the strikers and cleaning up the through balls. This takes patience as well as skill, and a little bit of mongrel. Deano and Jacob have developed into their roles, not only do they do the work in defence they have really taken to the idea of getting forward at the right times, supporting the midfield and getting back into position once their work is done. Anything that did sneak through was gobbled up by Braeden, the best keeper in our comp. Great job everyone.

It was a very, very good performance. The kids got exactly what they deserved for all the effort they have put in over the year. We’ve trained twice a week and many of them have done extra training with the Academy, Shadow, and Development squads. It was a just reward for their hard work.

All the parents a very proud of their achievements, and the kids can certainly hold theor heads high. Hope to catch up with everyone again on presentation night so we can relive the great year and get ready for next year.