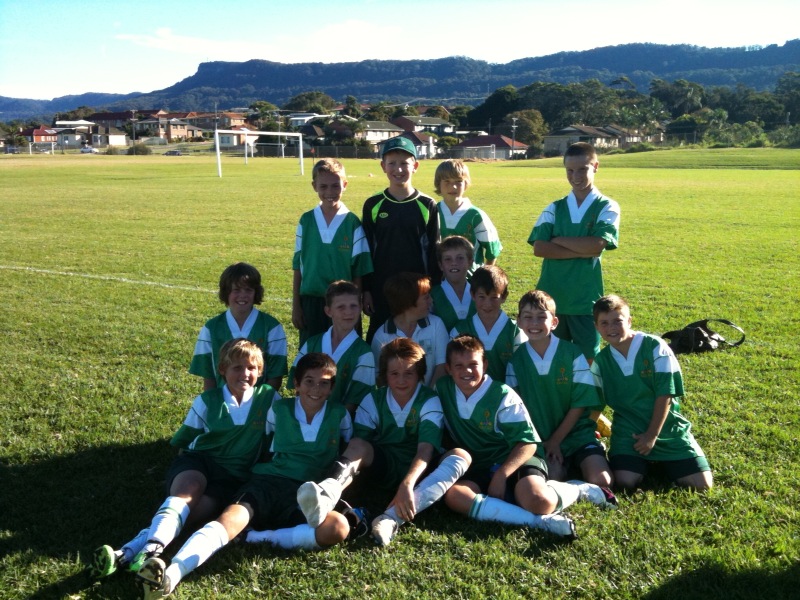 The RVPS open boys football team played the first game of the state knockout tournament at Ocean park on Friday against Wonoona East. The majority of the team is made up of past a present RVJFC players. The team won comfortably 5-1.

As the club president is was fabulous to see many of the boys return to the Emerald Green strip which they wore during their first years of playing football. Alexei Rosser, our Most Promising Junior Award recipient from last year, is training and playing in the Illawarra Project 22 squad, and Mitch Turner who played U6 to U9s with RVJFC is now playing in the Illaawarra U12 side. Both played outstanding football and contributed greatly to the win.

William Gilmour and Kurt Decker both play U12s with Bulli and are in the Illawarra Shadow squad and had strong games. Liam Harris did a great job of cleaning up in goals and is also part of the Bulli Team. Bailey Speechley, our 2008 Luke Kerr Most Couragous Player, made a couple of cameo appearences at full back and stopped a couple of attacking raids. Nathan Renshaw hasn’t played for a couple fo years but dusted off the boots for a run around the park. Josh Hoffman capped off the U12 contingent with a solid display in his right forward position. Josh is now a Corrimal ranger.

The Bellambi contingent of Casey Graham and Jack Tolhurst were very, very solid and played in a variety of positions (some of which they hadn’t played in a while!)

Jacob Hill is a league player having a crack at Soccer and seemed to enjoy his run.

Our current U11s all played a big part in the game. Sam Luyten is still recovering from a sore heel but had a short run at full back. Dean played very well at full back (even though he believes he is a striker), as did Ryan and Wilson in their customary positions of Left Forward and Right Side of Midfield.

The next game is against Balgownie PS, after they beat Corrimal East by a staggering 17 goals to 2. A few of the boys in that team played with Mitch in the Bally division 1 side. This will be a real test for the boys. If they can get through that game in tact the sky’s the limit.

Thanks to Dave Graham for coaching the team, and Mr Gardner and Mr grierson for allowing us to be involved with the boys.