U8 Green Vs Balgownie Black.

What a match! What a frenzy of football finesse! When U8 Green took to the field something passed between the players; an understanding, an aspiration… a hunger!

As soon as the whistle was blown announcing the start of the game, all Cobras spread out to maximise their physical presence in the game. Maintaining their positions and seeking opportunities, U8 Green played as a cohesive team.

The smaller pitch presented both teams with congestion issues and there were some awkward scuffles and collisions that impeded the flow of the game but these challenges seemed only to fuel the Cobras focus. All players gave their best and a spectacular game of football unfolded.

Five minutes in and Josh scored a cracker of a goal, his first for the season. Soon after, Tanesha shot one in and the sideline went wild! It wasn’t long before Bailey slipped one past the keeper, securing a comfortable lead. Tom added to the tally with two more goals. All goals were celebrated with massive grins and recognition that all of the goals scored were a culmination of the skills of the whole team.

Mikey applied effective pressure and jolted the ball out of the scramble of legs on many occasions. For a player who has never played before it is great to see his confidence increase each week. Stuart has been on the hunt since the season began and again made some exciting breaks. His pace and momentum are exhilarating to watch. Anakin was pivotal to many key moments in the game and generously assisted Tom with his first goal. Despite a headache, Jackson had a great impact on the game. His determination and commitment to follow through after a tackle demonstrates his great tenacity.

Balgownie also played well and in between the magic moments of U8Green’s performance, they managed to secure four solid goals of their own.

Games like this match illustrate the potential of U8 Green. If they continue to play like they did today, as a unified team and with the hunger of a lone wolf, we will bear witness to many more magic moments.  It was both an entertaining and exciting match to watch. Even if the score hadn’t favoured them, it would still be noted as a memorable match of the season.

Match awards went to Jackson and Bailey for their solid contributions to the game. 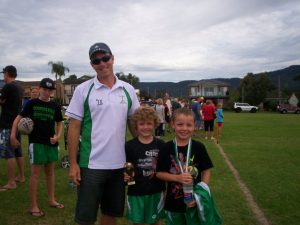