The sun radiated, promising a morning of great football. Official looking Balgownie people had their measuring tapes out and put down a few cones and agility poles to mark out the field of play. U8 Green were pumped and ready for action.

Kick off! Smiles and grunt aplenty, both teams went for it with gusto. Passes and strong kicks were a feature and each team member gave their best efforts in the game. Anakin returned from illness and put in some great tackles. Future oppositions will be on high alert when he is back to full health! Stuart made some amazing runs up the wing and fearlessly attacked the opposition to reclaim possession of the ball. Josh played extremely well in both forward and back positions. In fact, when in defense he was like a predator waiting for his prey, timing his advances perfectly by blocking the momentum and progress of the opposition.

It was Mikey’s first game and his great tackling efforts did not go unnoticed. He was able to successfully loosen and move the ball away from the opposition and he never gave up. Persistence is a valued quality and we are fortunate that our team has plenty of it. Likewise, Bailey’s efforts in goals and his speed and resolve reveal a great talent in this game. His eyes were always on the ball and his focus was inspiring.

Jackson’s fierce determination was also evident on the field and in goals, with many goal scoring opportunities thwarted by his keen eye and quick thinking. Tenacious Tanesha’s lion heart roared throughout the whole game. No player on the other team was spared from her assertive play making.

Tom was battling more than just the players. The agility poles used to mark the goals defied their name and became an inflexible force to be reckoned with. Fortunately, after two foiled shots, he was able to put one away. The event served as a reminder for all players in goals to make sure they collect the ball in front of the goal line. Needless to say, U8 Green were on the board!

Mikey and Tanesha were the worthy recipients of the match awards and while U8 Green were defeated on this occasion, in all of their supporter’s eyes they were winners. Their sportsmanship and never-give-up attitude are two of their greatest qualities. They are a strong team and we are all excited about their 2010 football journey. 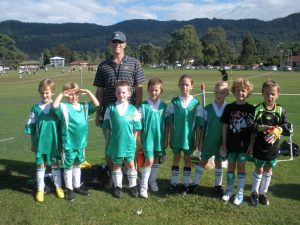 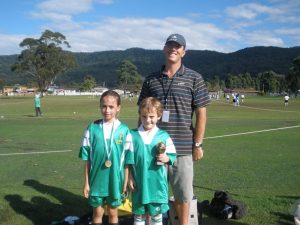